There are eight elevators leading down into the tunnel, and although the ride is only one stop, it takes a whole minute. To move between the eight access points, maintenance and security people use bicycles to move around the tunnel – sometimes for several kilometres. The LHC is automatically operated from a central control centre, so once the experiments have started, engineers and technicians will only have to access the tunnel for maintenance.

As it's been said before, the LHC was built into a tunnel that already existed.  The tunnel had a diameter of 3.0 m. We can make the approximation that a very thin circular tunnel is the same as a tunnel of the same diameter but straight.

Let’s calculate the volume of the tunnel:

The mass of the rock that was dug out to form the tunnel, assuming an average density of 5000 kg/m3,

So, 76 olympic pools could be filled with this amount of rock.

To allow a correct sequence of bunches injected into the ring, and to be able to insert new bunches when non-useful ones are extracted it´s necessary to allow enough space for that (For a more complete discussion click here...).

The effective number of bunches is 2808. 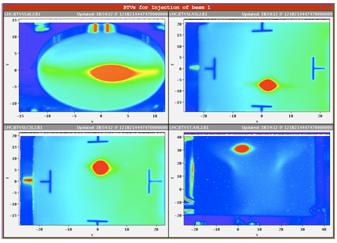 And the  number of collisions  per second