LHC will be producing roughly 15 Petabytes of data annually, which thousands of scientists around the world will access and analyse. LHC detectors are gigantic digital cameras that examines the millions of collisions per second and identifies which ones should be stored and analyzed in more detail.

The mission of the Worldwide LHC Computing Grid (LCG) project is to build and maintain a data storage and analysis infrastructure for the entire high energy physics community that will be using the LHC.

The data from the LHC experiments will be distributed around the globe, according to a four-tiered model. A primary backup will be recorded on tape at CERN, the “Tier-0” centre of LCG. After initial processing, this data will be distributed to a series of Tier-1 centres, large computer centres with sufficient storage capacity and with round-the-clock support for the Grid.

Grid computing connects computers distributed over a wide geographic area. Just as the World Wide Web enables access to information, computing grids enable access to computing resources. These resources include data storage capacity, processing power, sensors, visualisation tools and more. Grids can combine the resources of thousands of different computers to create a massively powerful computing resource, accessible from the comfort of a personal computer and useful for multiple applications in science, business and beyond.

The Worldwide LHC Computing Grid relies on dedicated optical fibre networks to distribute data from CERN to eleven major computer centres in Europe, North America and Asia. From these, data is dispatched to more than 140 centres around the world. Together, these distributed computers provide the power to manage the LHC’s data.

GRID: Is a service for sharing computer power and data storage capacity over the Internet. The Grid goes well beyond simple communication between computers, and aims ultimately to turn the global network of computers into one vast computational resource.

Visit the next link for more information 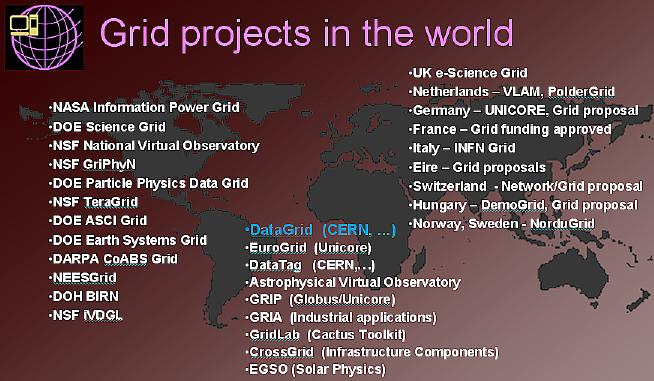