In particle physics, a trigger is a system that uses simple criteria to rapidly decide which events in a particle detector to keep when only a small fraction of the total can be recorded. Trigger systems are necessary due to real-world limitations in data storage capacity and rates.Since experiments are typically searching for "interesting" events (such as decays of rare particles) that occur at a relatively low rate, trigger systems are used to identify the events that should be recorded for later analysis. Current accelerators have event rates greater than 1 MHz and trigger rates that can be below 10 Hz. The ratio of the trigger rate to the event rate is referred to as the selectivity of the trigger. For example, the Large Hadron Collider has an event rate of 1 GHz (109 Hz), and the Higgs boson is expected to be produced there at a rate of at least 0.01 Hz. Therefore the minimum selectivity required is 10−11.

Triggers usually make heavy use of a parallelized design, exploiting the symmetry of the detector: the same operation may be performed at the same time on different parts of the detector. Yet on a global scale they are essentially serial devices: in fact, they are usually divided in "levels". The idea is that each level selects the data that becomes an input for the following, which has more time available and more information to take a better decision.

Custom hardware processors make an initial decision to keep an event in a few μs using coarsely segmented data from a subset of the detectors, while holding all the high-resolution data in pipelined memories. Commodity processors make subsequent decisions using more detailed information from all of the detectors in more sophisticated algorithms that eventually approach the final reconstruction.

Each detector has its own trigger design and features. For example, in CMS the first level allows to store all data for 3.2 μs, after which no more than 100 kHz of the stored events are forwarded to the High Level Triggers. This must be done for all channels without dead time. The Level-1 (L1) system is based on custom electronics. The High Level Trigger (HLT) system, relies upon commercial processors. The L1 system uses only coarsely segmented data from calorimeter and muon detectors, while holding all the high-resolution data in pipeline memories in the front-end electronics. The HLT is provided by a subset of the on-line processor farm which, in turn, passes a fraction of these events to the remainder of the on-line farm for more complete processing. 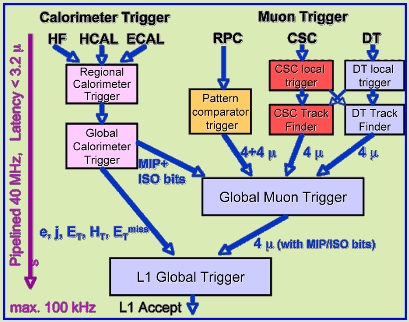 A block diagram of the CMS L1 trigger

The LHCb experiment is designed to exploit the large number of b-anti_b pairs produced in pp interactions at 14 TeV at the LHC, in order to make precise studies of CP asymmetries and rare decays in b_hadron systems.

The LHCb experiment operates at an average luminosity of 2×1032 cm−2·s−1, i.e. much lower than the maximum design luminosity of the LHC, which makes the radiation damage more manageable.

At a this luminosity  the 10 MHz of crossings (instead of 40 MHz in CMS or ATLAS) with visible pp interaction are expected to contain a rate of about 100 kHz of b-anti_b-pairs. However, in only about 15% of the events will at least one Bmeson have all its decay products contained in the acceptance of the spectrometer. Furthermore the branching ratios of B-mesons used to study CP violation are typically less than 10−3.

So the number of interesting events per second that should be founded is:

But remember, 10 MHz of collisions are produced, so a huge work has to be done from the trigger system.

The  L0 (Level-0) is implemented in custom electronics, and reduces the non-empty rate from 30 to 1 MHz at a fixed latency of 4μs. The latency is the time elapsed between a pp interaction and the arrival of the Level-0 trigger decision at the FE (The Front-End system of LHCb is defined as the processing and buffering of all detector signals until they are delivered to the Data Acquisition System-DAQ).

The purpose of Level-0 is to reduce the LHC beam crossing rate of 40 MHz, which contains about 10 MHz of crossing with visible pp-interactions, to the rate at which in principle all sub-systems could be used for deriving a trigger decision. Due to their large mass b-hadrons decay to give a large ET lepton, hadron or photon, hence Level-0 reconstructs:

-        the highest ET hadron, electron and photon clusters in the LHCb Calorimeter

which information is collected by the Level-0 Decision Unit to select events.

The Level-0 Decision Unit (L0DU) collects all information from Level-0 components to form the Level-0 Trigger. The L0DU is able to perform simple arithmetic to combine all signatures into one decision per crossing. This decision is passed to the Readout Supervisor which transmits its Level-0 decision to the FE.

For more details go to http://lhcb-elec.web.cern.ch/lhcb-elec/html/architecture.htm