LHC smash protons together in head-on collisions at energy levels higher than ever achieved before. The collider is housed inside the already existing circular tunnel that is almost 27 km in circumference (r = 4243 m) and about 100 metres underground.

The tunnel starts near CERN (Meyrin), goes close to the Jura mountains, continues underneath French countryside, comes round near Geneva airport (Switzerland) and then back to CERN. 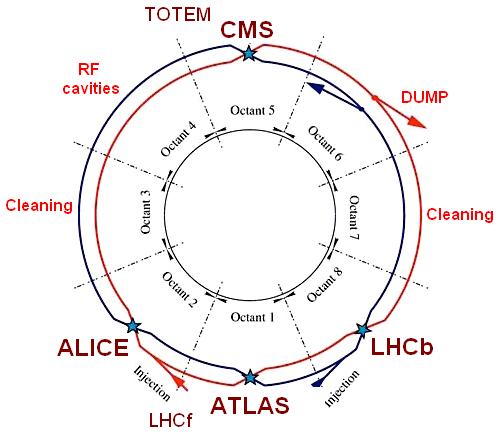 The LHC is not a perfect circle. It is made of eight arcs and eight ‘insertions’.  LHC consists of eight 2.45-km-long arcs, and eight 545-m-long straight sections.

The arcs contain the dipole ‘bending’ magnets, with 154 in each arc. An insertion consists of a long straight section plus two (one at each end) transition regions — the so-called ‘dispersion suppressors’. The exact layout of the straight section depends on the specific use of the insertion: physics (beam collisions within an experiment), injection, beam dumping or beam cleaning.

A sector is defined as the part of the machine between two insertion points. The eight sectors are the working units of the LHC: the magnet installation happens sector by sector, the hardware is commissioned sector by sector and all the dipoles of a sector are connected in series and are in the same continuous cryostat. Powering of each sector is essentially independent.

An octant starts from the middle of an arc and ends in the middle of the following arc and thus spans a full insertion. Therefore, this description is more practical when we look at the use of the magnets to guide the beams into collisions or through the injection, dumping, and cleaning sections.

The LHC provides proton–proton collisions with a centre-of-mass energy of 14 TeV and a very high number of collisions per second and per cm2 (luminosity). In order to achieve this, the collider must operate with 2808 bunches per beam and a very high intensity (1.15 × 1011 protons per bunch); this requires 9300 superconducting magnets of different types.

Four particle detectors have been constructed and housed in huge underground caverns. They record the tracks left by debris from the collisions. The detectors (also called experiments) are: ATLAS (A Toroidal LHC ApparatuS), CMS (the Compact Muon Solenoid), ALICE (A Large Ion Collider Experiment) and LHCb (study of physics in B-meson decays at LHC).

In addition, there are two experiments more: TOTEM, LHCf, MoEDAL, FASER and SND@LHC (or experiments) at LHC.

Teams of researchers continue to design new "small" detectors with specific properties and targets. This is the case with the CODEXb detector..

The high luminosity performance of the LHC relies on storing, accelerating, and colliding beams with unprecedented intensities. The transverse energy density of the nominal beam is 1000 times higher than previously achieved in proton storage rings. Tiny fractions of the stored beam suffice to quench (see below) a super-conducting LHC magnet or even to destroy parts of the accelerators. Note that a 10-6 fraction of the nominal LHC beam will damage Copper. The energy in the two LHC beams is sufficient to melt almost 1 ton of copper!

The LHC beam dumping system is designed to make a fast extraction of the circulating beams from each ring of the collider with minimal losses. The particles are then transported to an external dump blocks, which are located in caverns at the end of a 700 m long vacuum line. 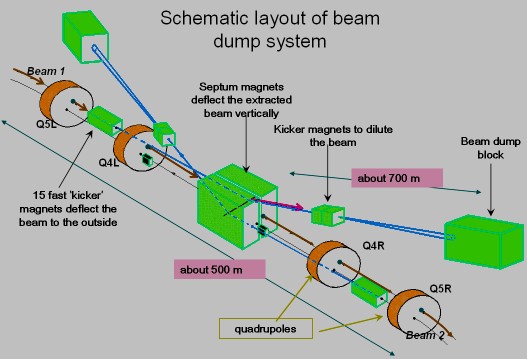 A system of horizontal and vertical dilution kickers in these lines will be used to sweep the beams in an “e” shaped form on the surface of the dump, as an undiluted full energy and intensity beam can damage the dump block. For the case of a normal beam dump, the 2808 proton bunches are swept over a path length of about 110 cm at the entrance window of the dump.

This is the only element in the LHC that can withstand the impact of the full beam.

The block is a cylinder of graphite composite eight meters long and one meter in diameter, which is encased in concrete. As it absorbs the beam energy, it becomes very hot but does not melt. This size allows to spread out the hadronic showers over a large volume.

When it is time to get rid of the beams (also in case of emergency!) , the beams are ‘kicked’ out of the ring by a system of kicker magnets and send into a dump block. 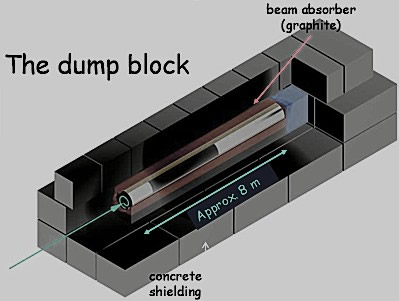 When part of a magnet quenches, the conductor becomes resistive, which can lead to excessive local energy deposition (temperature rise !!) due to the appearance of Ohmic losses.

To protect the magnet:
.- The quench must be detected: a voltage appears over the coil (R ~ 0 to R > 0).
.- The energy release is distributed over the entire magnet by force-quenching the coils using quench heaters (such that the entire magnet quenches !).
.- The magnet current has to be switched off within << 1 second.

Magnet quenching is a real danger, with only a small fraction (10-6) needed to quench a SM.
A quenched dipole will require a beam dump in a single turn - 7 TeV (720 MJ) dissipated in 89 ms!
An error in dumping the beam will expose accelerator components to serious radiation risk.