where h is known as the harmonic number.

A particle with a speed v = βc  circulates around the machine with a period or frecuency:

In LHC h is very large.

The segments of the circumference centred on these points are called BUCKETS.

So, LHC might accelerate a beam made up of 35640 bunches. 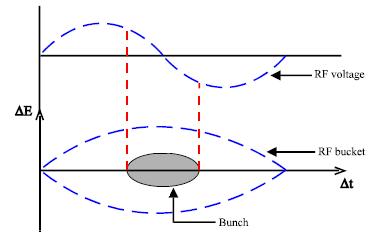 It is important to note that two synchrotrons are included in LHC injection chain: PS and SPS. In fact PS is responsible for providing the bunch packets with 25 ns spacing that finally will be injected from SPS in the LHC.

But let's go back to LHC. Not all LHC Buckets need to be filled with bunches. The buckets are just virtual positions on LHC circumference. Each bucket can hold a bunch of protons or can be empty.
The abort gap is a number of buckets in a row which are supposed to be never loaded with protons and form a gap in the circumference. The purpose of this gap is that in the dump process it takes a short, but signifficant time to switch on the magnets which divert the beam from the LHC into the dump.

Besides, the bucket configuration will determine where the protons in the two beams will cross over and collide (in which detectors specific bunches will be colliding).

The number of occupied buckets in LHC is 2808.

It is important to recall that: higher energy particles will have a longer orbit and a lower revolution frequency, which will delay their arrival at the accelerating cavity. Conversely lower energy particles will have a shorter orbit, a higher revolution frequency, and will arrive earlier at the accelerating cavity.

Imagine two particles in a bunch: particle A which has an energy (or momentum), which corresponds properly to the RF frequency, and particle B which initially arrives at the cavity at the same time as A, but its energy is slightly higher than A’s (therefore its revolution frequency is slightly lower). See next figure.

Suppose that when a particle A passes through the RF cavity, the voltage is zero. In this case every time A passes through the cavity it will see zero voltage. Particle A is synchronous with the RF voltage. Let’s suposse tha particle B on the first turn arrives at the same time as A but with a higher energy, therefore on the second turn it arrives later than A and sees a decelerating RF voltage and lossing energy. Several turns after its energy will be equal to that of A but arriving still later, and therefore being decelerated until its energy is enough lower to surpass the revolution frecuency of A. Then B will see an accelerating RF voltage which increase its energy until reaching the same situation than discussed for the first turn and the cycle will be restarted.

As we said above, particle A is called the synchronous particle. All the other particles, like particle B, will oscillate longitudinally around A under the influence of the RF system. These oscillations are called synchrotron oscillations.

For larger energy deviations these circles get flattened into ellipses, as the restoring force drops off from the linear central valves. 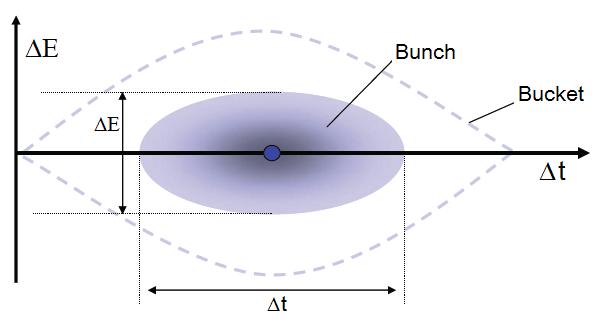 The LHC longitudinal acceptance (Bucket area) at 7 TeV is 7.91 eVs

Longitudinal Emittance for LHC is 2.5 eVs for top energy