“There is no basis for any concerns about the consequences of new particles or forms of matter that could possibly be produced by the LHC.”  Five physicists who comprised the LHC Safety Assessment Group wrote in their report.

"Whatever the collider will do, they said, Nature has already done many times over".

The report is available at http://lsag.web.cern.ch/lsag/LSAG-Report.pdf.

The physicists, who labored anonymously during 2007 and and a half of 2008, are John Ellis, Michelangelo Mangano, Gian Giudice and Urs Wiedemann, of Cern, and Igor Tkachev, of the Institute for Nuclear Research in Moscow.

Some critics have argued, however, that Cern has ignored or downplayed the risk that the collider could produce a black hole that would swallow the Earth, or that it could create some other dangerous particle.

The LHC Safety Assesment Group, however, pointed out that cosmic rays have produced equivalently energetic collisions with the Earth and other objects in the cosmos over and over again. “This means that Nature has already completed about 1031 LHC experimental programs since the beginning of the Universe,” they write. But the stars and galaxies endure.

The next calculations are based on the LSAG Report above mentioned.

Cosmic rays are energetic particles originating from space that impinge on Earth's atmosphere. Almost 90% of all the incoming cosmic ray particles are protons, about 9% are helium nuclei (alpha particles) and about 1% are electrons

Cosmic rays are continuously bombarding Earth's atmosphere with far more energy than protons will have at the LHC, so cosmic rays would produce everything LHC can produce. 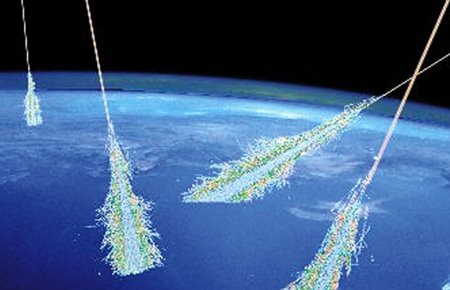 We have to take into account relativistic conditions. Let's consider the LHC Frame (two protons colliding head on) and the Frame CR (Cosmic Ray) considering a proton (cosmic ray) colliding against a fixed target (proton at rest).

E is the energy of the two partícles and P is the total momentum. From the special theory of relativity, we have: 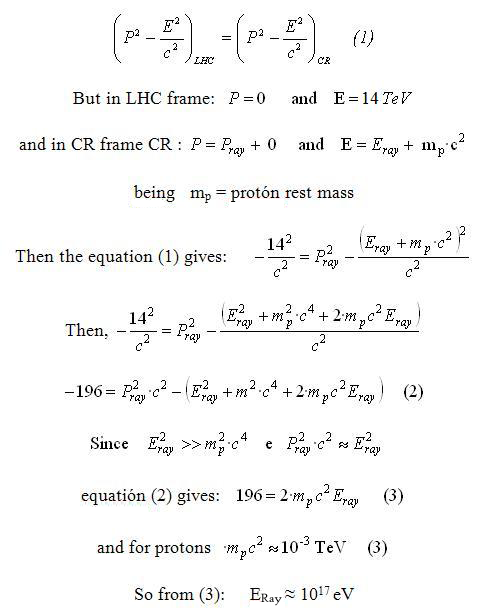 So, an equivalent energy in the centre of mass would be obtained in the collision of a cosmic-ray proton with a fixed target if its energy reaches or exceeds 1017 eV.

The next figure (taken from here) shows the the differential energy spectrum for cosmic rays. It represents the number of cosmic rays (depending on its energy) that are arriving per square meter and second on our atmosphere. 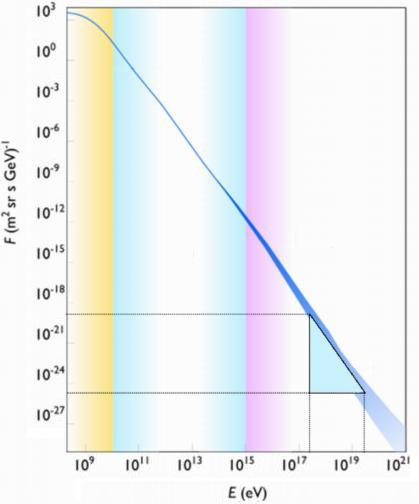 We have to consider the total flux for cosmic rays with energies of 1017eV or more.

To get roughly that value we can calculate the area of the triangle showed. Its hight is ~10-20 particles/(m·sr·s·GeV).1 and its base is over 1020 eV (1011GeV). Flux is negligible for cosmic rays with more energy.

Let's supose that the Sun receives the same amount of this kind of cosmic rays (the Sun has a strong and complex magnetic field) and we also consider that all cosmic rays are protons. One more accurate approximation would not affect the conclusion that LHC presents no danger for us.

The area of the Suns’s surface is:

Then, every second the number of LHC-like collisions on the Sun’s surface is:

The number of collision per second in ATLAS or CMS at maximum luminosity achievable is about:

Therefore, the Sun suffers every second the same “danger” that it will be suffered due to LHC programme in the same time. But this danger for the Sun has been taking place since its creation, and the Sun still exists.

If we consider other astronomical bodies like millions of stars  that receive even much more cosmic rays because its larger surface, it is easy to understand that the LHC programme is not a risk for our existence.

These conclusions can be extended to all the "danger situations" argued by some critics:black holes, magnetic monopoles, vacuum bubbles, etc.

The real and dangerous thing about the LHC is not any imagined threat that it poses, but rather the unbridled and utterly absurd fears promulgated by uninformed people. Of course such things have always occurred such as in the witch hunts of the middle ages, but today absurdities spread with the speed of light through the Internet, and can have potentially deleterious effects on genuine and well-founded research.