Basically Linac4 works in the same way that any linear accelerator. It uses radiofrequency cavities to charge cylindrical conductors. The ions H- injected from de ions source pass through the conductors, which are alternately charged positive or negative. The conductors behind them push particles and the conductors ahead of them pull, causing the particles to accelerate. Small quadrupole magnets ensure the hydrogen ions remain in a tight beam.

Some of Physics at LINAC 4.

Let's calculate how ions  H- interact among them as they are running, by using a simple aproximation.

In a simple aproach we could consider that the beam is composed by an infinite number of "lines" (or "streams") of ions H- contained in a cylinder that represents our beam. It is like a number of "spaghettis" with negative charge that create and suffer electrical and magnetic forces among them.

Any two "lines" of ions H- traveling in one direction with velocity v and spaced by a distance r, will experience the relative force that we are going to calculate.

In this regard, every particle in one "line" feels the Lorentz Force produced by the other "line": 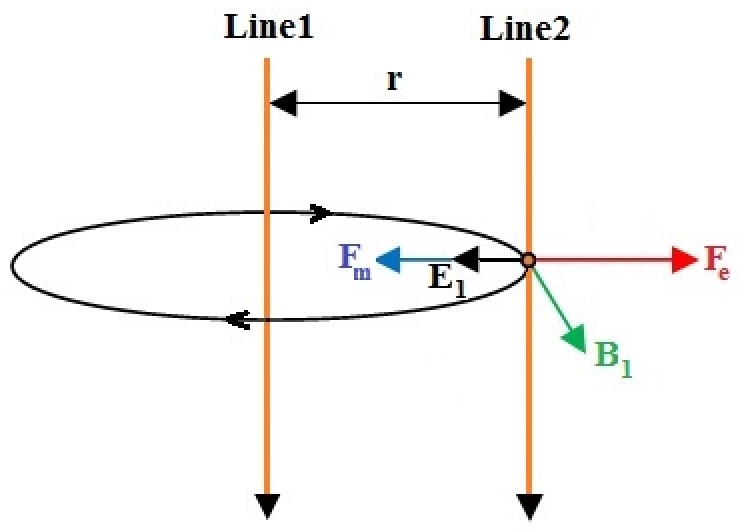 Both forces created for the "line1" are acting on every particle of "line2" in opposite directions. So:

The value of E1 acting on each particule can be calculated from Gauss Law (electric field a distance r created by an infinitely long wire):

where λ is the "linear charge density".

The value of B1 can be calculated from Biot-Savart Law:

Where I is the intensity of electrical current in the line1

Taking again λ we can substitute I :

So the repulsive force, F , depends on the value of λ, or E, which limits the number of particle per bunch (per pulse). But, due to the term (1/γ2), F decrease dramatically in relativistic conditions.

So, the faster the particles go, the smaller the repulsive F is.