In an accelerator, particles circulate in a vacuum, and the LHC has the particularity of having not one, but three vacuum systems:

ULTRAHIGH VACUUM: the beam vacuum pressure is about 10–7 Pa in the beam pipe at cryogenic temperature (~5 K) because we want to avoid collisions with gas molecules, and lower than 10–9 Pa close to Interaction Points, because in this part is where collisions take place.

The pressure in the beam pipes of the LHC will be about one hundred times lower than on the Moon. It is the emptiest space in the Solar System.

But the largest volume to be pumped in the LHC is the insulation vacuum for the cryomagnets (~ 9000 m3 — like pumping down the central nave of a cathedral!)

Cryopumping of gas on the cold surfaces provides the necessary low gas densities but it must be ensured that the vapour pressure of cryosorbed molecules, of which H2 and He are the most critical species, remains within acceptable limits. 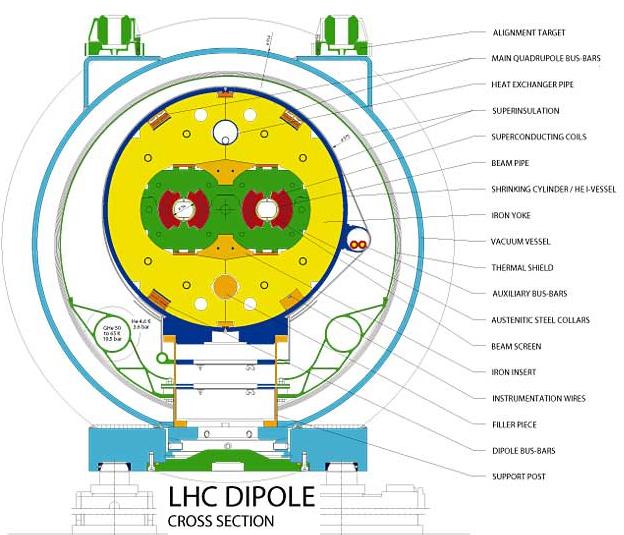 The vacuum system for the LHC will be at cryogenic temperatures (between 1.9 and 20 K) and will be exposed to synchrotron radiation emitted by the protons. A stringent limitation on the vacuum is given by the energy deposition in the superconducting coils of the magnets due to nuclear scattering of the protons on residual gas molecules because this may provoke a quench. This effect imposes an upper limit to a local region of increased gas density (e.g. a leak), while considerations of beam lifetime (100 h) will determine more stringent requirements on the average gas density. The proton beam creates ions from the residual gas which may strike the vacuum chamber with sufficient energy to lead to a pressure 'run-away' when the net ion induced desorption yield exceeds a stable limit. Synchrotron radiation induced gas desorption, well known from electron rings, also affects the dynamic vacuum in the cold LHC by the gradual accumulation of easily re-desorbable, condensed gas and by the steeply rising H2 vapour pressure as the coverage exceeds a monolayer. These dynamic pressure effects will be limited to an acceptable level by installing a perforated 'beam screen', as indicated before, which shields the cryopumped gas molecules at 1.9 K from synchrotron radiation and which also absorbs the synchrotron radiation power at a higher and, therefore, thermodynamically more efficient temperature.

More information in Oswald Gröbner, for the LHC Vacuum Group  , VACUUM SYSTEM CHAPTER 12 in LHC Design Report Volume I, or in The LS2 vacuum challenge