Large Hadron Collider is the world’s highest energy particle accelerator. LHC (situated in the northwest suburbs of Geneva on the Franco–Swiss border) generates the greatest amount of information that has ever been produced in an experiment before. It is aimed to reveling some of the most fundamental secrets of nature.

Despite the enormous amount of information available about this topic, it is not easy for non-specialists to know where the data come from.

Basically, the purpose of this Website is to help introducing and informing the wider public about the LHC experiment, and some simple physical calculations which take place in all particle accelerators. They can also be used in secondary school classrooms in order to stimulate the curiosity of the students, help them understand the physical concepts of LHC, and they can also be used as an example of the relationship between the cold equations of Physics on the blackboard and the exciting scientific research.

It is important to point out that the calculations that appear on this website are adapted to secondary school level, and in most cases, although they may be useful, they are simply approximations of the correct results.

We show below some facts that are of special relevance, appearing in the different Sections of this website the development of the concepts and contents that we consider to be of interest.

This third experimental phase runs until the end of 2025.

A few weeks after the start of RUN3, several records were already reached.

Some of these are:

Current schedule foresees Long Shutdown 3 (LS3) to start in 2026, one year later than in the previous schedule, and to last for three instead of 2.5 years (taken from CERN Courier).

One of its main goal has already been achieved in the first phase of operation: to find the Higgs boson.

The Nobel prize in Physics 2013 was awarded to François Englert and Peter W. Higgs "for the theoretical discovery of a mechanism that contributes to our understanding of the origin of mass of subatomic particles, and which recently was confirmed through the discovery of the predicted fundamental particle, by the ATLAS and CMS experiments at CERN's Large Hadron Collider."

The ATLAS and CMS collaborations announced their discovery of the particle at CERN on 4 July 2012. This result was further elucidated in 2013. 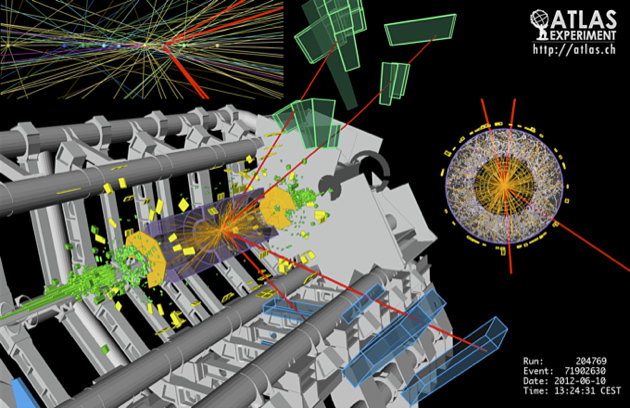 Interesting articles about the Higgs Boson on the tenth anniversary of its discovery are the following:

Another important achievement comes from the LHCb Collaboration, December 2022, on the Principle of Universality of Lepton Flavor.

The international LHCb collaboration presented on 20 December new measurements of decays that provide one of the most accurate tests to date of a key property of the Standard Model of particle physics, known as lepton flavour universality.

The weak interaction, as described by the Standard Model (SM), is supposed to act equally for all the leptons. This means that decays involving, e.g., muons or electrons should have equal probabilities (with small corrections due to the different masses of these leptons). An example of such decays are B+→ (K+μ+μ-) and  B+→ (K+e+e-), in which a beauty meson decays to a pair of leptons, accompanied by a K meson. Following the reasoning above, if one measures the probability of both decays and then makes the ratio (RK) of these probabilities one would theoretically expect a value very close to 1. Previous studies of these decays have shown significant differences from theoretical predictions, potentially due to the effects of new particles or forces.

The results announced in Dec 2022, which exceed previous comparisons, are in perfect agreement with the Principle of universality of leptonic flavour.

LHCb makes its first dataset available to the public

December 2022: the LHCb collaboration has made data from LHC Run1 available to the public for the first time, allowing anyone in the world to carry out research.
“The data collected at LHCb is a unique legacy to humanity, especially since no other experiment covers the region LHCb looks at,” said Sebastian Neubert, leader of the LHCb open data project. “It has been obtained through a huge international collaborative effort, which was funded by the public. Therefore the data belongs to society.”

Another very important research topic, in which LHC should play an important role, is the measurement of the muon's magnetic moment value. In this field we should refer to the Muon g-2 Experiment (Fermilab) which searches for telltale signs of new particles and forces by examining the muon’s interaction with a surrounding magnetic field. By precisely determining the magnetic moment of the muon and comparing with similarly exact theoretical predictions, the experiment is sensitive to new physics lurking in the subatomic quantum fluctuations surrounding the muon. The strong evidence announced in 2021, by Muon g-2 Experiment, that muons deviate from the Standard Model calculation might hint at exciting new physics. Muons act as a window into the subatomic world and could be interacting with yet undiscovered particles or forces (taken from Muon g-2 News). 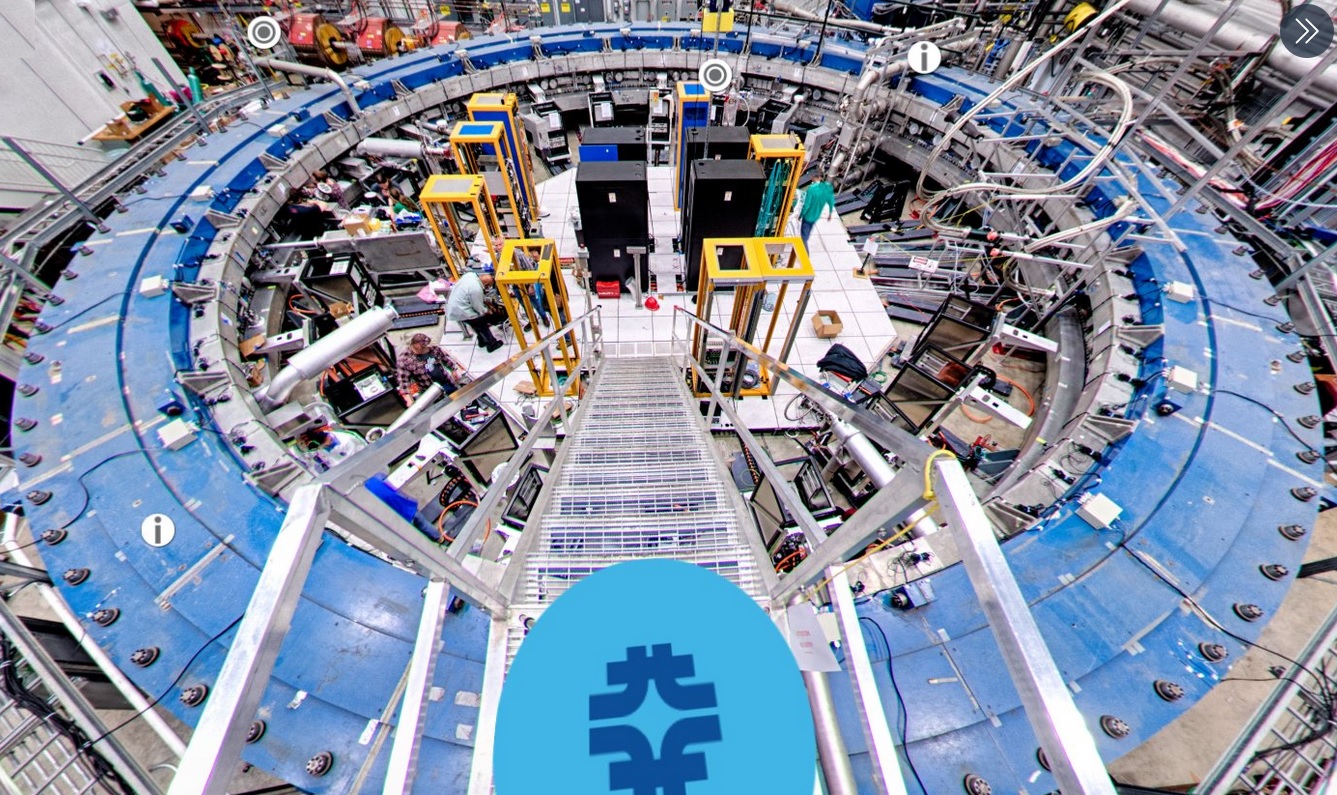 Most of them have been discovered in the LHCb experiment.

6 July 2017, at the EPS Conference on High Energy Physics in Venice, the LHCb experiment at CERN’s Large Hadron Collider has reported the observation of Ξcc++(Xicc++) a new particle containing two charm quarks and one up quark. The existence of this particle from the baryon family was expected by current theories, but physicists have been looking for such baryons with two heavy quarks for many years. The mass of the newly identified particle is about 3621 MeV, which is almost four times heavier than the most familiar baryon, the proton, a property that arises from its doubly charmed quark content. It is the first time that such a particle has been unambiguously detected.

In March 2018, at the 53rd annual Rencontres de Moriond conference, taking place between 10 and 24 March 2018 in La Thuile in the Aosta Valley in Italy, ATLAS and CMS have unveiled a suite of new measurements of the properties of the scalar boson associated with the Brout-Englert-Higgs field. These results come from the examination of data from proton-proton collisions at an energy of 13 TeV that the LHC delivered in 2015 and 2016. The data sets used by ATLAS and CMS each contained around two million Higgs bosons, of which around 10,000 were readily accessible to the detectors.

25 July 2018, for the very first time, operators injected not just atomic nuclei but lead “atoms” containing a single electron into the LHC. This was one of the first proof-of-principle tests for a new idea called the Gamma Factory, part of CERN’s Physics Beyond Colliders project.

24 October 2018, protons performed their last lap of the track. At 6 a.m., the beams from fill number 7334 were ejected towards the beam dumps. It was the LHC’s last proton run from now until 2021, as CERN’s accelerator complex will be shut down from 10 December to undergo a full renovation. For the next weeks the collider will master lead ions (lead atoms that have been ionised, meaning they have had their electrons removed). The collisions of lead ions allow studies to be conducted on quark-gluon plasma, a state of matter that is thought to have existed a few millionths of a second after the Big Bang.

In March 2019 (Rencontres de Moriond), the LHCb collaboration at CERN has presented for the first time, the matter–antimatter asymmetry known as CP violation in a particle dubbed the D0 meson. To observe this CP asymmetry, the LHCb researchers used the full dataset delivered by the Large Hadron Collider (LHC) to the LHCb experiment between 2011 and 2018 to look for decays of the D0 meson (this meson is made of a charm quark and an up antiquark and its antiparticle, the anti-D0, into either kaons or pions). CP violation is an essential feature of our universe, necessary to induce the processes that, following the Big Bang, established the abundance of matter over antimatter that we observe in the present-day universe. So far, CP violation has only been observed in particles containing a strange or a bottom quark.

In January 2022, LHCb Collaboration announced the Measurement of the W boson mass.The W boson mass is measured using proton-proton collision data at √s = 13 TeV corresponding to an integrated luminosity of 1.7 fb−1 recorded during 2016 by the LHCb experiment. The W boson mass was determined to be:

where uncertainties correspond to contributions from statistical, experimental systematic, theoretical and parton distribution function sources. The measurement agrees well with the prediction of the global electroweak fit and with previous measurements.

However, the Collider Detector at Fermilab (CDF) Collaboration reported in April 2022 a precise measurement of the W boson mass extracted from data taken at the Tevatron particle accelerator (Fermilab), and, surprisingly, the researchers found that the mass of the boson was significantly higher: 80,433.5 ± 9.4 MeV/c2. The result deviates from the standard model, but it is an experimental measurement that will have to be validated by future experiments, for example at the Large Hadron Collider (LHC). 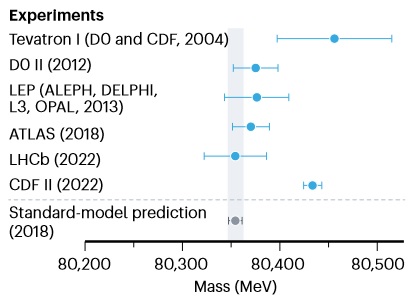 Image from Gibney E. (2022). “HOW THE REVAMPED LARGE HADRON COLLIDER WILL HUNT FOR NEW PHYSICS".

... and to know what is coming see HL-LHC: High Luminosity and also The Future Circular Collider.

We reiterate that the calculationscalculations that you will be finding in this Website are adapted from the Physics of Secondary School and in most cases they are just very simple approaches to the correct results.

Besides the Sections of this Website, it may be interesting to take a look at other websites which give simple description of Particle Physics. For example: An Introduction To Particle Physics or other ones that you can find in the section Education of this website.

This Website has received the permissión of CERN to use informations, data, texts and images from CERN websites. The use on this Website of the various materials from publications produced by CERN is strictly in accordance with CERN's terms of use.

The rest of images, graphs, etc., not belonging to us, have been taken as "fair use" qualification, but, please, let us know if that is not the case.