The standard model describes everything we know about the smallest building blocks of nature yet observed. It's the most accurate theory ever developed, in any field. And without the Higgs, it doesn't make much sense. Based purely on first principles, elementary particles should be massless. Some, like photons, do have zero mass; yet others are surprisingly heavy. Enterthe Higgs, which would—in theory—interact with these latter particles to make the difference.

At the bottom of this page, an analogy is introduced by comparing refractive index and mass, to help to understand how Higgs field works.

In order to present this topic in a very simple way, we can consider the next aproximation  taken from US-LHC Communications Group:

"Some particles interact with the Higgs field more than others,  which is why the particles in the Standard Model all have different  masses. For light particles such as electrons and neutrinos, traveling through the Higgs field is like running down the street. Heavier particles, such as the electron’s larger cousins, muon and tau, experience more resistance, as though they were running in a  swimming pool full of water. For the top quark, which is by far the heaviest particle in the Standard Model, traveling through the  Higgs field might feel like wading through a vat of molasses."

The event a little bit more in detail:

This event is consistent with two Z particles decaying into two muons each. Such events are also produced by Standard Model processes without Higgs particles. They are also a possible signature for Higgs particle production, but many events must be analysed together in order to tell if there is a Higgs signal.

The precision electroweak measurements pointed to the existence of a light Higgs. The Standard Model Higgs mass range LHC experiments use falls between 114-600 GeV.

The LEP2 experiments ruled out Higgs masses below 115 GeV, and the Tevatron experiments excluded the region from 158 to 174 GeV. Thus the presently favored region for the mass of a Standard Model Higgs lied between 115 and 158 GeV. Besides, results from the ATLAS and CMS collaborations, presented at the Biennial Lepton-Photon Conference inMumbai (India) August 2011, show that the the mass region 145 to 466 GeV have been excluded, with 95 percent certainty.

As mentioned above the electroweak measurements indicated a preferred region between 115 and 135 GeV, making this a prime region where Higgs boson was finally discovered.

Actually, Higgs is not directly measured in the detectors because it decays into lighter Standard Model particles. The particular rate at which it decays to different final states (“branching ratios”) is showed in the next figure. 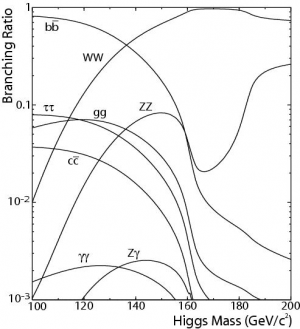 (Taken from Flip Tanedo An Idiosyncratic Introduction to the Higgs)

On the 4th of july 2012 July, the ATLAS and CMS experiments presented their latest preliminary results in the search for Higgs particle. Both experiments observe a new particle in the mass region around 125-126 GeV.

Clear signs of a new particle had been observed in the data, at the level of 5 sigma, in the mass region around 126 GeV (~126,5 GeV). The results were preliminary but the 5 sigma signal at around 125 GeV seen was dramatic. This was indeed a new particle. It must be a boson and it’s the heaviest boson ever found. The This particle was consistent with Higgs Boson. 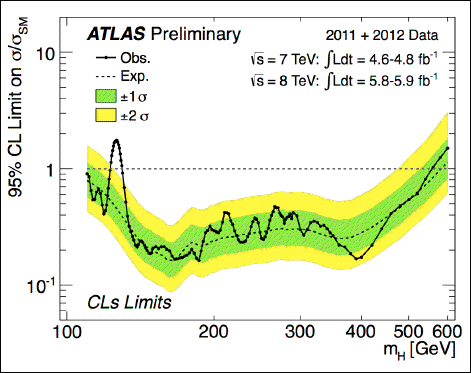 The next step was to determine the precise nature of the particle and its significance for our understanding of the universe. Are its properties as expected for the long-sought Higgs boson, the final missing ingredient in the Standard Model of particle physics? Or is it something more exotic?

As it has been said before (see "Branching ratio" figure), Higgs boson can decay into lighter particles: photons, or B mesons, or Tau leptons, or W bosons, or Z bosons. Deviations in the decay frequencies could hint at behaviour that does not fit with the standard model. There may even prove to be more than one type of Higgs.

The Standard Model describes the fundamental particles from which we, and every visible thing in the universe, are made, and the forces acting between them. All the matter that we can see, however, appears to be no more than about 4% of the total. A more exotic version of the Higgs particle could be a bridge to understanding the 96% of the universe that remains obscure.

The Higgs is nicknamed (called by Nobel Prize-winning physicist Leon Lederman) the God particlebecause of its importance to the Standard Model.

Lederman said he gave the Higgs boson the nickname "The God Particle" because the particle is "so central to the state of physics today, so crucial to our final understanding of the structure of matter, yet so elusive", but jokingly added that a second reason was because "the publisher wouldn't let us call it the Goddamn Particle, though that might be a more appropriate title, given its villainous nature and the expense it is causing.

But many scientists dislike this nickname and some of them prefer "the champagne bottle boson" as the best popular name. The reason is because finding it will be a cause for big celebration for physics community, and also because the physicist David J. Miller earned a bottle of champagne promised by William Waldegrave (British science minister in 1993) after being able to explain with his famous metaphor what the Higgs boson is.

The Higgs particle: an analogy for Physics classroom.

When light, composed by photons, passes through a transparent material such as glass, its velocity changes according to the refractive index of the material. This slowing is caused by the electrical fields in the material. When the beam of light enters the material at an angle, it is bent or refracted as a result of the decrease in velocity.

A very important detail is that the speed of light in a transparent material is slightly different for each wavelength (i.e., momentum of the photons). For instance, considering visible light in water:

So “yellow” photons travel through water faster than blue, and red even faster. We could say that blue photons have more problems to move in water than yellow and red. In this way, the blue photons act like as if they had more “inertia”, i.e., more “mass”. Refractive index gives a measure of the interaction between photons and a material medium through which they travel, but, somehow, it could be also considered an “index of mass”, since the bigger the value the smaller the speed of the photons.

Therefore, in vacum all the photons travel with identical speed, but if the Universe were filled with water photons corresponding to different wavelengths would travel with different speeds. As it has been said before, they would have “different masses”. So we would be passing from a symmetrical situation to a non-symmetrical one. This is what in Particle Physics is called symmetry breaking phenomenon.

Now we are ready to establish our comparison. Initially, all the particles would be travelling through an “empty” Universe with the maximum speed permitted. So they would all be massless, and from this point of view the Universe would be symmetric. That is what SM originally states. But obviously the Universe does not work in this way.

The current SM suggests that all the particles had no mass just after the Big Bang, but as the Universe cooled and the temperature fell below a critical value, an invisible field called the ‘Higgs field’ appeared filling all the space. We could also say that the Higgs field was born in the begining of the Universe, but it only showed its influence once the Universe cooled down enough.

Unlike magnetic or gravitational fields, which vary from place to place, the Higgs field is exactly the same everywhere. What varies is how the different fundamental particles interact with it. That interaction is what gives particles mass. Of course, other kinds of interaction, such as the electromagnetic, weak or strong interaction may contribute significantly to the resulting mass. Moreover, the degree of resistance of the Higgs field is different depending on the fundamental particle, and this generates, e.g., the difference in mass between an electron and a quark.

Now, suppose a quark or electron moving (making up composite particles such as proton, neutron, or various atoms) in this uniform Higgs field. If these atoms (or molecules) change their velocities, that is, if they accelerate, then the Higgs field is supposed to be exerting a certain amount of resistance or drag, and that is the origin of the inertial mass.

This turns out to be a similar situation to what we have seen above. The Higgs field acts as a “transparent material” with an specific “refractive index” for each kind of fundamental particle. So, this is the mecanism which provides with mass each different particle, and this index is what physics calls “mass”. According to its “index” particles have a different behaviour when they interact each other.

So this field is responsible for the different masses observed for particles and it constitutes the symmetry breaking mechanism that explains how our Universe works.

From a quantum point of view, we can only stir up the Higgs field in discrete units. The smallest possible disturbance is due to a Higgs Particle, or more precisely, a Higgs Boson. ATLAS and CMS are general-purpose LHC detectors designed to see a wide range of particles and phenomena produced in LHC collisions. The Higgs boson, possibly hundreds of times heavier than a proton, could be created in the proton collisions in the center of the ATLAS and CMS detectors at LHC.

As it said before, the ATLAS and CMS collaborations announced their discovery of the particle at CERN on 4 July 2012. This result was further elucidated in 2013.