The experiment is relatively small, cheap and quick to install but its physics potential is huge. The MoEDAL detector will consist of layers of plastic attached to the walls and ceiling of the cavern that houses the VELO detector of the LHCb experiment. Physicists will look for tell-tale collinear 'etch-pits' created by a stable particle such as a magnetic monopole or a massive stable supersymmetric particle crossing through the plastic. 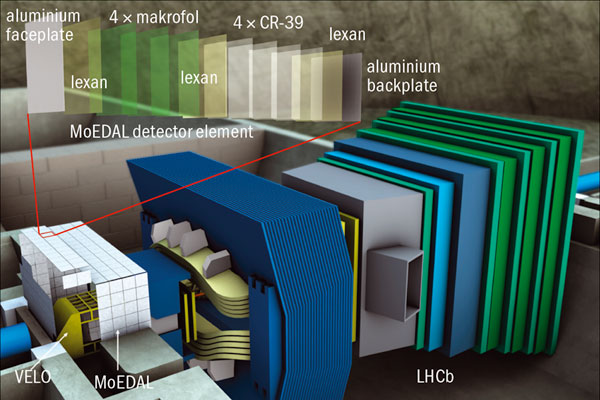 The international MoEDAL collaboration, made up of physicists from Canada, CERN, the Czech Republic, Germany, Italy, Romania and the US, is preparing to deploy the MoEDAL detector during the next long shutdown of the LHC, which will start late in 2011. The full detector comprises an array of approximately 400 nuclear track detectors (NTDs). Each NTD consists of a 10-layer stack of plastic  and altogether they have a total surface area of 250 m2. The detectors are deployed at the intersection region at Point-8 on the LHC ring around the VErtex LOcato (VELO) of the LHCb detector.