The lattice of the machine contains alternatively both QF and QD in the arcs, therefore the overall effect is to keep the beam focussed.

The focusing effect of the quadrupoles will make protons oscillate around the perfect centre of the vacuum tube. The number of oscillations in one turn of the machine is called the Q or the tune.

There´s a total of 858 quadrupole magnets.

This can be shown schematically as a sequence of divergent and convergent lenses. The quadrupoles are often laid out in what are called FODO patterns (where F focusses vertically and defocusses horizontally, D focusses horizontally and defocusses vertically and O is a space or deflection magnet). Following the beam particles in their trajectories through the focusing arrangement, an oscillating pattern would be seen. 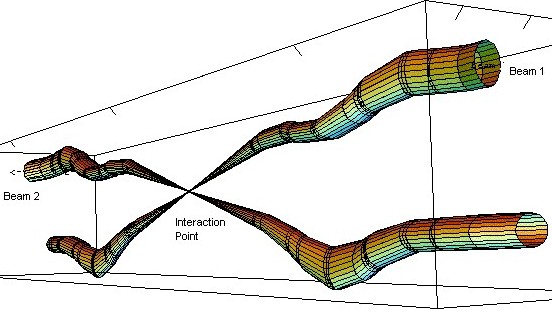